Racket string may well be the most important piece of equipment in the game of tennis. After all, you hit the ball with the string, not with the racket. A £60 racket with a great string job will probably play better than a £300 racket with tired strings.

Given its importance, it's surprising how few players pay attention to the strings. 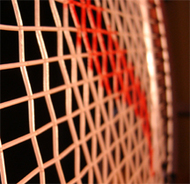 better strings in your racket set at the correct tension for your playing style and racket type.

The club have the services of a racket stringer who will restring your racket to your requirements.

The normal average price of a restring is usually about £20

We can restring your racket starting with synthetic gut strings from:   only £12 inclusive.

For non members, prices and other strings available from stock please contact to discuss your requirements:

Same or Next day service on request.

GET YOUR RACKET RESTRUNG! 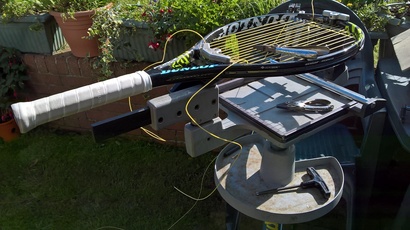 To increase the durability of your strings you should not expose your racket to extreme heat, cold or humidity. Therefore you should always keep your racket in its bag. To protect your racket head you can use a head tape.  This is useful if playing on a clay court or if the strings are not protected enough by the racket headguard.

Strings lose elasticity with time, one type of string faster, another type of string slower. This has a negative effect on the playability; players with a sensitive arm will feel it soon. In general you shouldn't play a string longer than 2 to 3 months. Then it's about time to cut out the strings and restring your racket.

A: Several factors increase the power of a racket's frame, listed from most to least important.
larger head size
greater stiffness through materials and profile
greater weight
more weight toward the head (head-heavy balance)

A:   A smaller head, stiffer frame, and tighter strings all favour control. The combination of a very stiff frame and tight strings is tough on the arm, though, so many advanced rackets have medium-stiff frames that moderate the harshness of tight strings.

Q: What is the best material for a tennis racket?

A: Because of its high stiffness-to-weight ratio, graphite is the preferred frame material in the better rackets. The graphite used in racket frames is not the true graphite you would find in a pencil, but a carbon fibre that adds stiffness and strength to the plastic resin with which it is mixed to form a frame. When a racket is made of resin and graphite alone, it is called 100% graphite, even though it is at least 40% resin. If other materials are used, the frame is called a composite. The quality of a composite frame depends largely on the amount of graphite. Some composites are too flexible for advanced players.

Q: What is the ideal weight for a tennis racket?

A: The ideal racket weight depends on how you play. You can get a recommendation for your playing style here. Generally, rackets weighing less than 10 ounces don't make sense for any adult, because they're too light to protect your arm from even the lighter shocks of infrequent doubles play. As long as you can wield it, more weight is advantageous, but most players find a very heavy racket too unwieldy though.

Q: How often should I restring my tennis racket?

A: The common rule of thumb is to restring as often per year as you play per week, but at least twice per year.  This is just a rough guideline. Some types of string lose tension faster than others, heavy spin hitters wear strings out much faster than flat hitters, its a pity that some players seem quite happy to let the strings decide when to be replaced -- by them breaking.

Q: What's the best string tension to protect my arm?

A: Lower string tensions prolong the contact between ball and strings, spreading the impact shock over a longer period of time and thus reducing stress on your arm.

Q: What gauge of tennis string is best?

A: Thinner gauges offer more resiliency (often equated with "feel"). Thicker strings last longer. Thick, 15 gauge strings are generally used in beginner and some intermediate rackets. Most serious players who don't like to restring too often use 16 gauge.  17 and 18 gauge are for those who can afford string luxury.  Each gauge has a light (L) variation that's a little thinner.

Q: What is a hybrid string?

A: A set of hybrid strings uses a co-polymer, kevlar or a similar polyester string for the main strings and for the cross strings, offering more elasticity and feel, a less durable multifilament or synthetic gut string.  The crosses don't need to be especially durable, because it's the mains that take most of the abuse and are first to break at least 95% of the time.  The more resilient crosses add springiness to the string bed, which with all kevlar strings for instance, would be extremely stiff.  The mains should usually be strung at a lower tension than the crosses because their greater stiffness would prevent the crosses from deflecting properly if both were equally tight.  Most string manufacturers are now marketing special hybrid string sets, as many of the professional players now favour these string set-ups

Contact us today if you are interested in finding out more about our club either as a player, official, coach or volunteer.

Details of Data Controller are